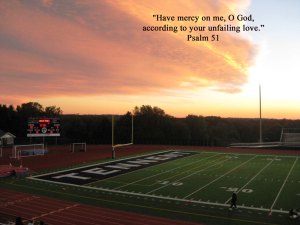 Can an enemy be more than dead? Are there degrees to an army being slaughtered? None of my history books made distinctions between defeated foes: slightly destroyed soldiers VS completely demolished warriors. Victory is victory. So what’s the meaning of Romans 8:37?

“In all these things we are more than conquerors through him who loved us.”

Sounds like the kind of victory I’d love to have. Is it possible to be more than a conqueror of a trial? How ‘bout the trial of raising a child with mental illness (MI)?

The phrase, “more than conquerors” reminds me of how my second graders would write. Their limited vocabulary didn’t stop them from expressing emotion. If they wanted to convey extreme excitement, they simply used repetition.

“We had a very, very, very, VERY, good time!” The level of enjoyment dictated how many ‘verys’ were used.

Adults use much more sophisticated language. We use superlatives.

I once had a conversation with Chris about words used to describe children with disabilities. He was interested in hearing what I’d be teaching my college students in an upcoming Foundations of Special Education class.

“We’ll be discussing our nation’s history of special education. We usually have a lively discussion about labels which are used to describe children,” I explained. “It seems there’s a label for every exceptionality except gifted.”

As always, I enjoyed his quick wit. His humorous oxymoron lightened the conversation.

It’s difficult for me to understand the phrase “more than conquerors.” However, I could relate to the phrase if it was “partial conqueror.” Having a son with MI fills my life with alternating victories. One day is peaceful—a delightful conquest. The next day is filled with challenges and I’m filled with despair—a surrender and retreat.  Spiritual territory is regained the following day as I rely on God to help me respond. I give an gentle answer in return for unprovoked anger—another battle won.  Maybe I’m more like a “sputtering conqueror” … relying fully on God one day, then not even seeking Him the next.

I’d love to believe I’m more than a conqueror. My problem is that I lose sight of the Victor. “We are more than conquerors THROUGH HIM WHO LOVED US.” During uncertainty I tend to forget the battle’s already been won.

Athletes know when the battle’s been won. Football players realize there’s no need to ravage an inferior team. When the score reflects the opposition has no chance of winning, they precipitate the ending. The mercy rule specifies that the clock should keep running (except for limited reasons).  The intention is to put an end to the misery as soon as possible.

God has His mercy rule in place. Eternity’s clock is ticking. There will be an end to our misery here on earth. In the meantime Romans 8:37 assures us that, “We are more than conquerors.”

Yes, the battle has already been won. God has gained an overwhelming victory. Believers can rest in His promise and presence. We’ve been promised eternal life with Him in heaven. And if that’s not enough, we have His presence in the form of the Holy Spirit. His indwelling power helps us with our earthly trials.

When things get tough with MI, we wonder if God has left us. We ask, “Who shall separate us from the love of Christ? Shall trouble or hardship or persecution or famine or nakedness or danger or sword (Romans 8:35)?”

Romans 8:38-39 assures us no hardship—not even MI—will separate us from His love.

“For I am convinced that neither death nor life, neither angels nor demons, neither the present nor the future, nor any powers, neither height nor depth, nor anything else in all creation, will be able to separate us from the love of God that is in Christ Jesus our Lord.”

The mention of angels and demons reminds us there’s a spiritual battle being waged. God’s angels protect His people. Sometimes God sends a heavenly messenger. Like the one sent to Daniel. Here’s how Daniel described the divine interaction:

“Again the one who looked like a man touched me and gave me strength. ‘Do not be afraid, you who are highly esteemed,’ he said. ‘Peace! Be strong now; be strong.’ When he spoke to me, I was strengthened and said, ‘Speak, my lord, since you have given me strength (Daniel 10:18-19).’”

How did Daniel qualify for that celestial encounter? The messenger explained what Daniel had done to earn the honor.

“Since the first day that you set your mind to gain understanding and to humble yourself before your God, your words were heard, and I have come in response to them (Daniel 10:12).”

I come before You humbly. I’m determined to fully understand Your victory. When all around looks dismal or when things seem out of control, help me remember Who’s fighting the battle. As Your messenger did for Daniel, strengthen me and give me Your peace. In Jesus’ name, Amen.

The more we reflect on God’s love and power, the more we find rest in Him. How can we even explain such love? By using surperlatives. Like Chris Tomlin did in his song ‘Indescribable.’