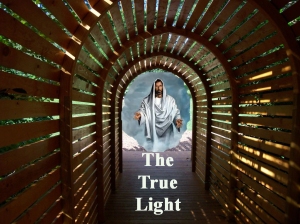 My college training prepared me to teach children with visual impairments. One of the courses required students to perform tasks blindfolded. Walking without vision scared me the most. I felt insecure and terrified in the darkness. What relief when I removed the blindfold! Light comforted me.

Those of us who raise children with mental illness (MI) experience those same feelings. During our darkest days we search for Christ—the true Light who comforts us.

Last week the account of our story ended with Chris’s hospitalization. I shared how God transformed that horrible memory by using it as a reminder of His love. Our dark days were about to get darker. Thankfully, Christ’s light shined brighter during those days.

A few hours after we got home I received a call from the hospital.

“Mrs. Chandler, Chris is refusing medication. Will you give us permission to give him an injection?”

When I called later I found out Chris had been put in isolation. He had put up such a fight when they tried to give him the medication. Images filled my head of Chris in isolation. Sedated. Confused. Alone.

“When will he be taken out of isolation? When can I visit him?” I questioned.

“We’re about to take him out now.”

When I arrived at the psychiatric ward, reality hit. The unit was locked. In order to gain entrance I had to ring a bell and announce my name. Then a nurse let me in.

The information provided by the social worker (when Chris was admitted) helped me understand some of the procedures.

It explained that guests were to visit patients only in the lounge areas, not in their bedrooms. But a nurse ushered me into Chris’s room. There sat a woman talking to Chris. When I entered the room she didn’t introduce herself to me. It was a very sensitive moment for Chris and me. This was the first time we had seen each other since the terrible scene at home. We hadn’t seen each other since we had him committed.

He raised his head in slow motion. His eyes seemed to be searching for something. As if trying to focus through a fog. He made no attempt to speak. Through his heavy sedation I could detect his emotional turmoil. A mother can just sense when her child is hurting.

“There’s no need for you to apologize. I know you’re just sick—”

“Do you think Chris has been under a lot of stress lately?” The unidentified woman asked, intruding on our private moment.

“I’m Chris’s psychiatrist,” she answered, still not giving me her name. “Chris has been contradicting himself,” she continued.

“Of course he’s contradicting himself; he’s psychotic!” I shot back. “Why are you talking with him in his bedroom? It’s against the policy for anyone to meet with patients in their bedrooms.”

“I just started working in this hospital and am not familiar with the procedures of the ward,” she explained.

Is she kidding? I read the procedures booklet immediately after we returned from the hospital. What kind of professional doesn’t prepare herself for her job? I wonder if she’s even qualified at all!

Later that day I typed a letter to the chief psychiatrist requesting Chris have a different psychiatrist. Chris was immediately switched to the care of the head psychiatrist.

Chris’s stay at the hospital was as bad as I imagined. He had to be strip-searched and all his belongings were taken from him. He was included with troubled teens (who were either suicidal, drug abusers, or violent). There were very strict rules about when he could call us, what he could wear, and what belonging he could have. Each time he had to use the bathroom a nurse had to unlock it.

No wonder Chris informed me, “I’m in jail, Mom.”

Howie and I visited Chris every time there were visiting hours. We stayed the entire time. Chris began to appreciate our unconditional love for him.

“Not yet, Chris. You’re here to get better.”

It was hard to witness him desperately trying to figure out how to get released.

He’d lay his head in my lap and ask me to stroke him. When my boys had grown up I missed doing thing like that. It was bittersweet to be able to nurture Chris in that way once again. I was happy to be able to comfort him. But it ate me up inside to see him so pathetic, so broken.

Howie passed the time by playing cards or chess with Chris. Robert didn’t want to see his brother in such a place. For a while I respected that. I knew Robert was dealing with lots of questions from curious students at school (some caring and some nosy). He was also struggling with getting around school on crutches.

“Chris needs to see you, Rob,”

During the time Chris was in the hospital there were several things that were hard to hear. Like what he said in one phone conversation.

“It was a good plan to put me in the hospital so I could see that life can be even worse than I ever imagined.”

In another phone call he said, “They took my Bible. God’s not in this place. I’m in prison.”

“Oh Chris. God IS in that place. He’ll let you know how much He loves you. You’ll see,” I assured him. Those words were spoken in faith, believing God would show Chris His love. I had no idea how, but was sure He’d be faithful.

The very next day Chris shared how God revealed His love in that dark place.

“One of the nurses is a Christian, Mom. She gave me back my Bible and said she’s praying for me.”

Turn to Him in your darkness and ask Him to hold your heart. Listen to Tenth Avenue North sing ‘Hold my heart.’    http://www.youtube.com/watch?v=ry6udsW9leA