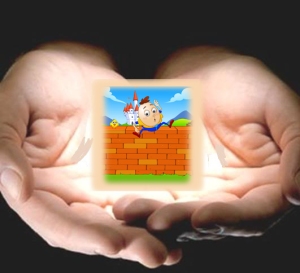 Have you entered Humpty Dumpty’s world? Do you feel like you’re teetering on the brink of destruction? About to fall apart?

When our child has a great fall, God holds us together. His loving arms are there to catch us. And soften the blow.

Our Creator was, “before all things, and in him all things hold together (Colossians 1:17).”

In Him all things hold together. Creation. Our lives. Our child. And us.

The Bible assures us that we will not shatter in the face of our trial. God’s power in us is unbreakable.

“But we have this treasure in jars of clay to show that this all-surpassing power is from God and not from us. We are hard pressed on every side, but not crushed; perplexed, but not in despair; persecuted, but not abandoned; struck down, but not destroyed (2 Corinthians 4:7-9).”

We have evidence of His power all around.

As long as chairs don’t disintegrate when we sit on them, we know that God holds the molecules together. As long as we can enjoy beautiful waterfall, we know God’s invisible gravity is still working.

Life seems chaotic at times. But we can trust in His invisible order.

He’s also given us visible examples of His masterful designs. Each person’s DNA proves there is order in His creations. We have visible displays of His order in each unique thumb print or snowflake. We find it in the colorful patterns on each butterfly or on Macaw birds. Exquisite symbols which tell us, “God can restore order in your life.”

We spot His power in creation. We detect it in forces like gravity. And we can sense His power working inside of us. Keeping us from breaking.

Listen to ‘Because He Lives’ and picture God holding you while He holds the future in His hands.

Silence fell over the college dining hall. Everyone savored each bite of the roast beef. Back in the day, such a meal came only once a year—at final time. Usually we had to choose from one form of “mystery meat” or the salad bar. Entrees often tasted like hospital food. So roast beef was a real treat. We didn’t want to interrupt the taste sensation with casual chatter. We were speechless.

Other things which delight our senses can leave us speechless. A breathtaking sunset which could never be captured. An unmatched athletic fete which would appear impossible to duplicate. An orchestra performance which could only be rewarded by a standing ovation.

The temporary inability to speak is usually caused by strong emotions. Either good or bad. Horror can render one speechless. Like news of the death of a loved one.

Often there are no words to describe secret pain suffered. A mother watching her child struggle with mental illness (MI) doesn’t even attempt to explain what’s in her heart. The carefree smile on her child’s face has been replaced with a dark stare. The young head that used to tip backwards in bubbling giggles now hangs down like a heavy wet rag. Her child once used to be the life of a party. Now she’s an empty shell of a person. Lifeless.

No words can explain the sorrow.

Mothers aren’t the only ones left speechless in the wake of MI. Sometimes our children with MI don’t speak. Clinical depression robs them of any desire to communicate. How their parents long for happy conversations!

Refraining from speaking isn’t always a bad thing. The best response often is silence. Whenever Chris fires unprovoked anger my way, I shoot a quick prayer heavenward. Asking God to help me remain silent. Whenever Chris makes an odd statement, Howie listens without response. Withholding our anger or judgment delivers an unspoken blessing to Chris. Silence conveys our unconditional love.

Poets and leaders have written about the value of silence.

Thomas Hardy (1840-1926), the British novelist and poet observed, “That man’s silence is wonderful to listen to.”

Winston Churchill (1874-1965), the British politician, pointed out, “When the eagles are silent the parrots begin to jabber.”

Mark Twain (1835-1910), a man known for his words, touted the benefits of silence. He chose strong descriptors to convey his passion about a pause. “The Pause; that impressive silence, that eloquent silence, that geometrically progressive silence which often achieves a desired effect where no combination of words however so felicitous, could accomplish it.”

What about the Bible? Does it tell us anything about silence? Christ often didn’t respond. He used silence to convey a powerful message or to make a point. Sometimes His silence was coupled with a look. Peter experienced one of those.

“Peter replied, ‘Man, I don’t know what you’re talking about!’ Just as he was speaking, the rooster crowed. The Lord turned and looked straight at Peter. Then Peter remembered the word the Lord had spoken to him: ‘Before the rooster crows today, you will disown me three times (Luke 22:60-61).’”

We find biblical warnings associated with talking in Proverbs. Verse nineteen in chapter ten tells us that, “In the multitude of words sin is not lacking, but he who restrains his lips is wise.”

“The heart of the righteous studies how to answer (Proverbs 15:28  NKJV).”

Knowing how fragile our children are, we choose our words wisely.

Proverbs 17:27 instructs us to use words sparingly. It provides a formula for a calm spirit. Knowledge + understanding + few words = a calm spirit.

“He who has knowledge spares his words, and a man of understanding is of a calm spirit.”

As we minister to our children with MI we seek a calm spirit. For our children and for us. We not only find serenity in carefully chosen words. We find peace in God’s glory. His creation leaves us breathless and reminds us of His power. In Him we have an all-powerful King who offers unlimited hope.

Phil Wickham, in his song ‘This is Amazing Grace’ sings about how God’s glory which leaves us breathless.

“Who shakes the whole earth with holy thunder

And leaves us breathless in awe and wonder

The King of Glory, the King above all kings”

Reflect on that breathless wonder as you listen to, ‘This Is Amazing Grace’ Phil Wickham    https://www.youtube.com/watch?v=cgsbaBIaoVc