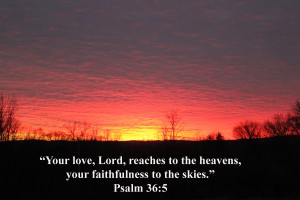 The mom stood speechless looking into her son’s bedroom. Who’d cleaned it so promptly? Her proud son took her on a tour of the spotless room. Such quick obedience was uncharacteristic of him. No wonder his mother looked stunned. Normally he has to be reminded at least five times.

Some parents hope for eager and rapid compliance from their children. But deep down inside they harbor low expectations. Procrastination and delay have been the pattern. It’s as if one simple reminder sparks a battle of the wills. “Clean your room.” (inaction) “I told you to clean your room.” (silent resistance) “Get up and clean your room now.” (slow-motion action)

It’s understandable that a parent would be shocked at a child’s uncharacteristic prompt obedience. But I’m ashamed to admit something. I’ve often been stunned when God has answered my prayers. Why is that? It’s not out of character for Him to show His power and love. Quite the contrary. I know He hears my prayers. Yet I’m frequently surprised when I witness His mighty power in our lives. I suppose it’s because I haven’t begun to fully understand His limitless love, and immeasurable power.

Maybe I should tape the words of Ephesians 3:20-21 to my refrig. They’d remind me, “Now to him who is able to do immeasurably more than all we ask or imagine, according to his power that is at work within us, to him be glory in the church and in Christ Jesus throughout all generations, for ever and ever! Amen.”

The past fifteen weeks I’ve been sharing the details of our story. Last week left off with Chris heading off to college. During Chris’s five years away at college God provided in ways I could never have expected. He provided immeasurably more than I could have imagined.

“In your decades of practice, how many patients with schizoaffective disorder have attended college?” I asked Chris’s psychiatrist.

“Only two,” he answered. Proving what a victory God had already worked in Chris’s life.

In the context of such an accomplishment, Chris faced additional stressors. Some were minor. Like when he lost his backpack which contained all his textbooks, notes, and student ID card. I surprised him by driving to his campus in order to purchase an additional set of textbooks, etc.

“I found my backpack,” Chris declared when he greeted me. It wasn’t a wasted trip. Chris felt supported.

Other situations arose which were much more difficult to solve. Like Chris’s serious back pain. Chris had joined Penn State’s Marching Blue Band. The high-step marching exacerbated his pain. Several epidural steroid injections eased his pain. But only delayed the inevitable. Back surgery would be the only procedure that would end his pain caused by two severely herniated discs.

During summer break Chris had a laminotomy—a procedure that removed part of his herniated discs.

“Can I march in the band this fall?” asked Chris.

“No. You could re-herniate the discs,” warned the neurosurgeon.

Chris marched anyway. God protected his back from further injury. And helped Chris manage the demands of college. The long band practices and studying didn’t overly stress him. He seemed fine until his blood tests revealed elevated liver levels.

“I’m going to reduce the dosage of your medication. That might bring them back into normal levels,” Chris’s psychiatrist said.

The reduced medication caused Chris to unravel. He was in his final semester of his program. Easter break was fast approaching. Soon after, he’d graduate college. But that dream seemed to be slipping away. Chris started calling home ten times or more each day. At all hours of the night. He seemed to be getting worse. There wasn’t much we could do.  It would take hours to drive to his campus.

“What did he say?” I wondered.

“You need to go to the hospital.”

I knew Dr. Kipley was right. But would Chris willingly admit himself into a psychiatric unit of a hospital? Especially after having experienced the horror previously?

Chris kept calling late into the night. Until that final brief phone call.

“Mom I’m in trouble,” was all he said before hanging up. That click thundered in my head. Like a bomb exploding.

What does THAT mean? Is he going to kill himself? Hurt others? Run away?

Howie and I prayed and asked God for wisdom. The Lord directed me to start calling hospitals close to his campus. We discovered Chris had admitted himself into the psychiatric unit in the hospital closest to campus. His heavenly Father gave him the courage to get help. In spite of Chris’s fragile and unstable emotions he managed to call a cab. Undoubtedly with God’s sustaining power.

We spent Easter visiting our son in the hospital. Once Chris was released the challenge remained. Would Chris be able to graduate on time? I turned to God who is able to do “immeasurably more than we ask or imagine.”

Please help Chris graduate on time. I know there seems no earthly way he can pass his finals. Not without full clarity of thought. But I know you’re able. Please give us wisdom to know how to help.

Thankfully Howie was able to tutor our son. Chris was released from the hospital into our care. While at home recovering from his near psychotic episode, Howie helped Chris study for his finals. Amazingly Chris passed all his tests and graduated on time. To God be the glory; great things He does!!!